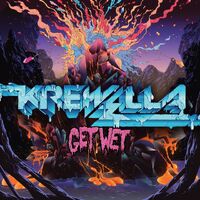 Get Wet is the first full-length studio album released by Krewella. It was released on September 24th, 2013. The album consists of fourteen full-feature tracks, all of which are either original mixes by Krewella, collaborations, or previously successful singles.

Each song on ‘Get Wet’ serves a different purpose for the emotional, multi-dimensional music listener. ‘Live for the Night’ is your party jam. ‘Dancing with the Devil’ is your fierce response to the haters (‘If we die, then who will be your enemy? So shut the f*ck up we’re about to leave a legacy”). ’Human’ sympathizes for the misunderstood, sad, and lonely (They say pain is an illusion, this is just a bruisin' , you are just confused, but I am only human). ’We Go Down’ is the rage anthem that unites the reckless little misfits (we are giants we are bigger than the monster, every second we are taking back the power, on a run till we get a fucking answer, try to hold us down but we’re only getting stronger).

Retrieved from "https://krewella.fandom.com/wiki/Get_Wet?oldid=7626"
Community content is available under CC-BY-SA unless otherwise noted.